It's been over a month since my last post. I know some people have been wondering what's happening with my hearing and why I'm not writing about it. Well, the short answer is - not a lot, and I'm getting sick of talking about it if I'm honest.  Since I was last here in blogland I had the follow-up MRI scan that I was waiting for. When I arrived at the hospital they told me to go out into the car park to the temporary scanner  parked there. Their regular scanner was broken and would be out of action for a few weeks. I’m not surprised, I thought to myself, remembering the bloody racket it made. This time I was prepared and brought my ear plugs. Unbelievably this one made even more noise.  It sounded like it was coming apart in a final grinding, clanking, banging hurrah. Are they really meant to make so much noise? I know it’s all very exciting cutting edge technology, with super cooled, superconducting magnets that make it all possible but you don’t expect such cool (excuse the pun) machinery to sound like something from a Victorian steel mill. This time they had me in there for nearly an hour and to my surprise I fell asleep for some of the time. I then had a few minutes in the CT scanner, a far more civilized affair. I had my metal belongings returned to me and was told I would hear from the consultant in due course.
About a week later I had an email from the consultant. What followed was one of the worst afternoons of my life. The email informed me that I had “bone disease” in the base of my skull that may require surgery. It sounded quite scary. Bone disease = bone cancer to me. Base of the skull? What’s that? After a few minutes on the internet I found out that the base of the skull is the bit that stops your brains from getting mixed up with the rest of the stuff in your head. I also found out that parts of it can be difficult, if not impossible to get to should surgery be necessary. I told Angie what I had found out and she just stared at me in disbelief. I think that she, like me was having trouble taking it in. I wrote back to the consultant and said that I was a little worried (so reserved, don't you think so?) and could we have a chat on the phone because I have a few questions like “Should I be getting my affairs in order?”
I spent the next few hours scaring myself some more by reading all about skull base disease. Did you know there are doctors that have clubs dedicated to a common interest in the skull base? Sounds like a great laugh.
About three hours after the first email, another arrives reassuring me that I shouldn’t worry. He’d shown my scans to a few of his mates with more experience of head bones and they both though it was a benign fibrous ossification and I should come in for a chat. I wasn’t sure I liked the sound of that either but was feeling better about the state of my head.
This morning I went to see the bone specialist to discuss the scans in person. He showed me the insides of my head which I found fascinating, but even I with an untrained eye could see the thing that was causing concern. It is situated almost at the center of my head, at about eye level and in front of the cerebellum. I would estimate it to be about 3-4cm across. I took a picture of the screen so you can see for yourself. 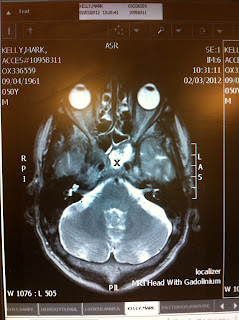 I asked him “what would you do?” He replied without hesitation “have a biopsy” I’m waiting for the appointment so he can drill a hole into my head, entering through my nose, to take a small sample of the offending tissue/bone.
What has become clear is that my “benign fibrous ossification” (if that’s what it is) is nowhere near my left ear and probably has nothing to do with my hearing loss.  It’s a bit like when you take your car to the garage because the air conditioning has stopped working and they call you to say it needs a new gearbox as well.
My hearing has stopped improving and the tinnitus is still a problem when it’s noisy but I’m learning to live with it. After pulling out of the DeeExpus shows in April, I thought my first gig with Marillion wouldn’t be until June but unfortunately that's no longer true. We are going to play in Caracas on April the 12th. That should be interesting in more ways than one. I’ll let you know how I got on in a few weeks time.
Posted by markke11y at 05:53